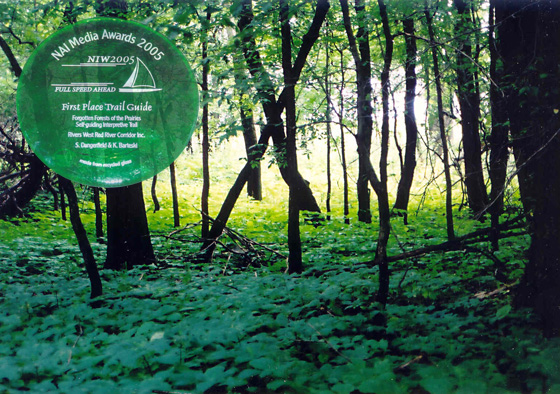 A Rivers West project, the Forgotten Forests of the Prairies trail guide was award first place by the National Association for Interpretation (U.S.A.).

The East Beaches Heritage Wing won an Award of Excellence from the Association of Manitoba Museums. The AMM stated: “This exhibition is an excellent example of meticulous research, innovative community engagement, and is accessible and appealing to visitors.”

Red Rock Marina Interpretive Centre received an Award of Excellence for its exhibits. Our role was as project manager, interpretive planner and research/writer. There were many excellent people involved in this project – you can see a listing of all those award winners on the credit panel on the Interpretive Centre page.

Putting Food on the Table exhibit in the East Beaches Heritage Wing. Much of the credit for this award goes to Wendy Buelow the videographer.

Bethune Memorial House National Historic Site Visitor Centre received the Silver Award of Excellence from Interpretation Canada in 2014. Our role in this Parks Canada project was to research and write the content.

The Amisk Interpretive Trail in Manitoba’s Whiteshell Provincial Park is four kilometres long with six stops. The 12 interpretive signs explore the theme – We all benefit from spending time in nature and have visionaries like Aldo Leopold and Walter Danyluk to thank. The trail was dedicated to Walter Danyluk who created Manitoba’s first parks.

The interpretive plan for River Road Heritage Parkway unites nine sites along a 13-kilometre stretch of historic River Road, including two Provincial Heritage Sites and four National Historic Sites. We worked with the four partners to develop new interpretation to celebrate the designation of the Red River as a Canadian Heritage River.

The Habitat Means Home curriculum guide  developed for Rivers West was honoured with a Bronze Award of Excellence from Interpretation Canada.

The Forgotten Forests of the Prairies is a self-guiding interpretive trail was awarded First Place in the Trail Guide category of the National Association For Interpretation Media Awards.

This is interpretation at some of its best. The main theme is reinforced throughout with intriguing storylines. The reader is a part of the story rather than a simple observer. Very good use of analogies and metaphors to make the messages relevant.

It’s easy to make connections with content through titles like Earth’s Arteries, Grandmas of the River, Slither and Slime, Jungle Duck. Plus the stories that follow are as creative. Appeals to all ages. Written succinctly and simply, in short interpretive messages.

The six Trans-Canada Trail guides took home top honours from Interpretation Canada for 2004. The gold was shared with the Royal Tyrrell Museum in Alberta. Below you can see a review of the six guides by Michael Haynes of Trails Canada, who calls them “One of the best guides to the Trans Canada Trail yet to be produced…”

Forester’s Footsteps Trail in Whiteshell Provincial Park was the first interpretive trail we developed. Much to our surprise and delight, the trail guide was submitted by Manitoba Parks to the National Association for Interpretation competition and was given an award of excellence. 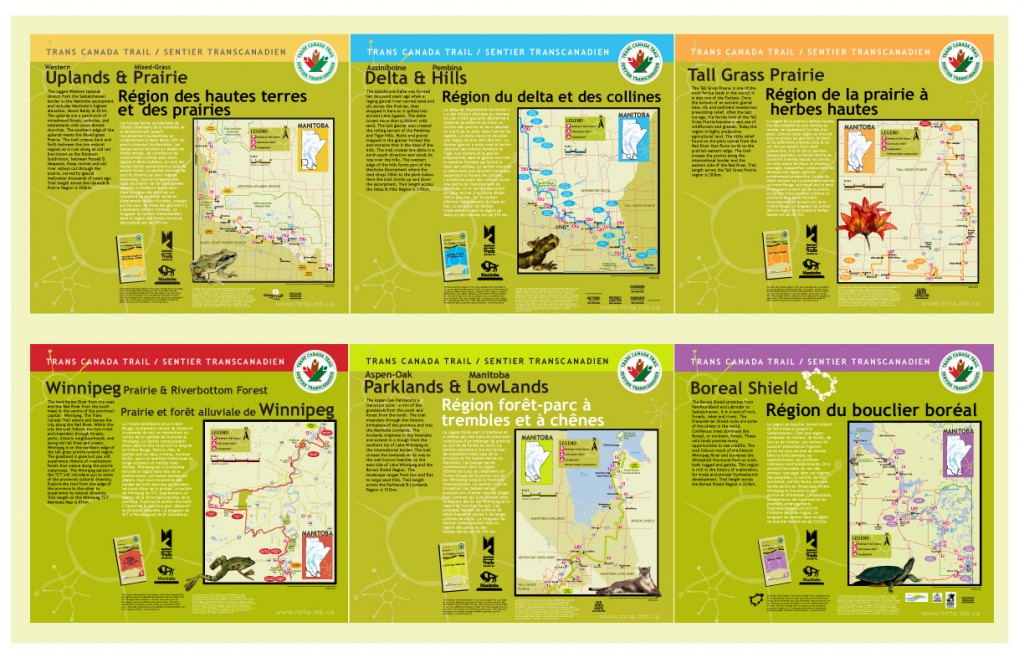 The 1,300 km trail traverses a diversity of landscapes, a variety many would be surprised to find – some familiar others unique.

One of the best guides to the Trans Canada Trail yet to be produced is a new series of maps outlining its route in Manitoba. Prepared by the Manitoba Recreational Trails Association, the not-for-profit association developing the route across that province, with funding assistance from the provincial government, this collection of six maps will certainly be an essential item for anyone wanting to travel the TCT in Manitoba.The maps are colourful and attractive. Lakes, forests, rivers, roads, communities, and contour lines are shown, as are provincial parks and forests. Inserts highlight sections where the route is complex, which is usually when it passes through towns. The path of the trail is unmistakable, a solid purple line slashing across the predominantly white chart, and every ten-kilometer interval is marked, providing a handy benchmark with which to judge your day’s plan.

For many, the best feature of these maps will not be their depiction of the route, but the natural, cultural, and heritage information found on the reverse side of each. These sheets are crammed full of information: bird species found along the profiled section, details of both cultivated and wild plant life, geological history, animals, architecture, reptiles, cautionary notes, local personalities, and almost anything else you can imagine that might interest you on your passage through the province. It is impossible to describe all that is found on the six maps of the complete set; there is simply too much there to profile it all. You will simply need to see for yourself….

Manitoba’s Trans Canada Trail Maps are well designed, attractive, and informative. Even those who might never find themselves able to hike in this province will appreciate how much they will learn from them. And who knows? You just might be encouraged to consider Manitoba when you are next planning to travel somewhere for a long walk.