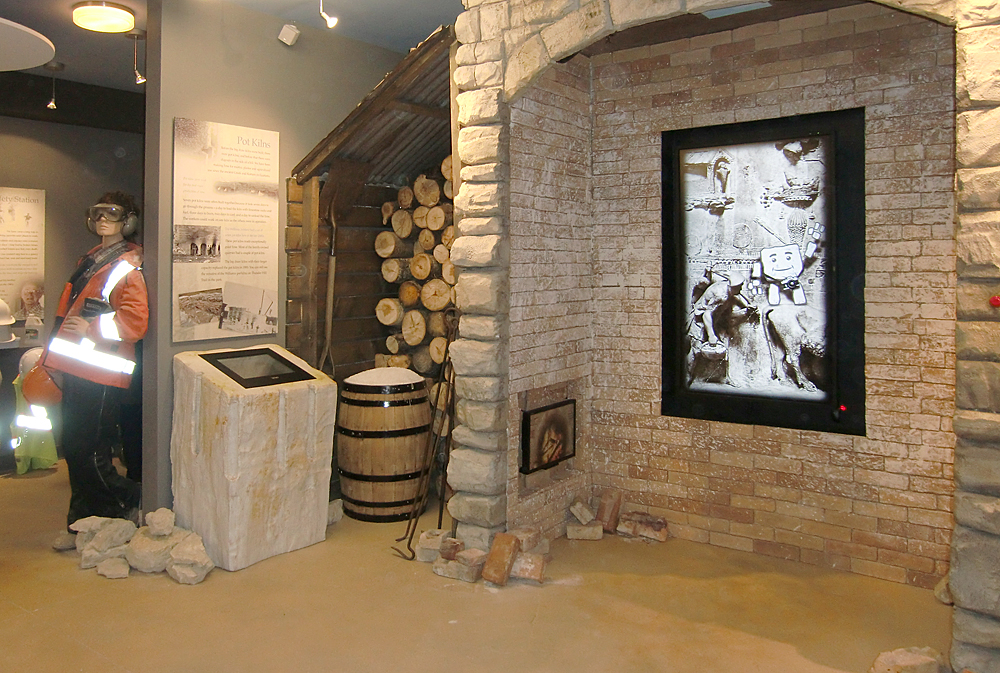 We wrote the script and researched the photos, then others add the animation and brought the kiln film to life.

In creating the 8 galleries for the new centre we wanted to bring exhibits to life with films and audio recordings.

We were responsible for concept, research, writing, and project management, while working with a sound studio and motion and interactive designers.

Here are a few of the products:

Ordovician Sea Gallery: A 3-minute film to explain the creation of our limestone in the Ordovician Sea. We researched and wrote the script that was then recorded at DACAPO Studios, Daniel Lamb of Quick Sheep did the animation.

Manitoba Rocks Gallery: A touch screen presentation to show how glaciers shaped many of the features in the park. It includes a chatty cartoon character acting as tour guide created by Daniel Lamb of Quick Sheep.

Town Gallery: Working with filmmaker Ken Rodeck, 3 short films were created from oral histories we gathered from local town folk. The films explore a quarry worker explaining how the kilns operate, women’s role in the industry town, memories of Stonewall. We also wrote a script and worked with DACAPO Studio to create an audio recording for a diorama of a local woman living in Stonewall in 1945.

Quarry Gallery: Kiln Film – a 2-minute film, with animation by Quick Sheep, to explain how the draw kiln turns rock into lime. Quarry Workers – we created 8 quarry worker characters through audio recordings; each explains their job in the quarry and its hazards.

A Story Told Gallery: Working with filmmaker Ken Rodeck a short conclusion film was created to summarize the importance of the quarry and its role in building Manitoba.