Nature Conservancy Canada has a new interpretive centre in the Tall-grass Prairie Preserve in southeastern Manitoba. They have converted a house into a centre for interpretation, a lab and staff quarters. With a minimal budget they asked us to create an exhibit for the entrance area. 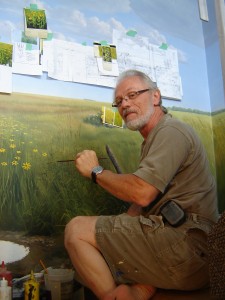 Hmmm, what to do with an awkward space – you enter to a threshold area and look directly at the stairwell to the second floor. Stairway – tall-grass prairie, what is the connection? One of the adaptations of prairie plants and animals, which have to survive frequent fire, drought, and brutal winters, is to live underground. The stairwell became the setting for a mural showing the different levels of life in the grasslands.

For this project we brought in a superb mural artist Hubert Theroux. We had him transform the stairwell into a mural of the prairie, from deep underground to the magnificent wide open skies. The key was to include many small details in this work of art, to excite and animate. We worked with NCC staff to choose important species to highlight. Hubert was provided with accurate illustrations from which to work. It took him a month to do the painting and it is beautiful.

To find out more about the NCC project see: The Weston Family Tall-grass Interpretive Centre 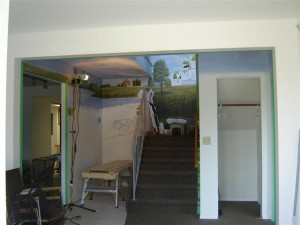 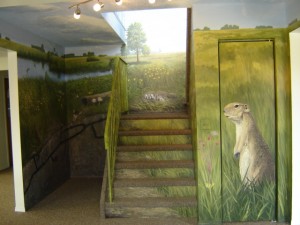 Now this is what greets visitors that entre the centre 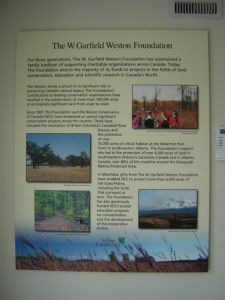 In addition to the mural, we created some introductory interpretive panels, and provided lighting and benches