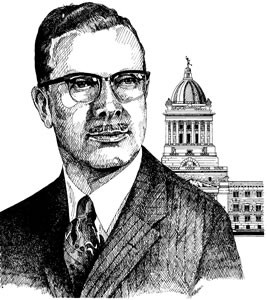 The new Duff Roblin Provincial Park is located at the gates of the Red River Floodway. A fitting site for the man that created the floodway that has saved the province’s capital from flooding on countless occasions.

The park is designated but development is on hold. The plan includes a multi-purpose park centre.
A component of the centre is interpretation on:

In addition to the park centre, a number of other interpretive elements are planned
for the new park.